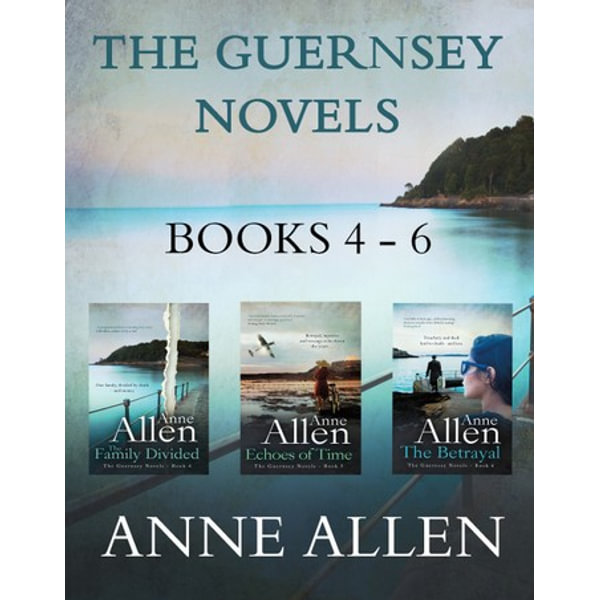 THE GUERNSEY NOVELS, by award-winning author Anne Allen, are linked but standalone stories, and will appeal to fans of The Guernsey Literary and Potato Peel Pie Society. THE FAMILY DIVIDED One family, divided by death - and money Andy Batiste, at loggerheads with his degenerate cousin, seeks to discover the truth of his family history. Why was his pregnant grandmother forced to flee to France? What really happened to her husband during the German Occupation, sixty years ago? Who accused Edmund, the elder son and Batiste heir, of being an informer? Was he really a traitor - and who murdered him? With Edmund's brother Harold now head of the family, enjoying the wealth which ought to have come to Andy's father, the family is forever divided. Andy yearns to clear Edmund's name and restore his father to his rightful inheritance. Andy is introduced to Charlotte Townsend, newly divorced, lonely and struggling with writer's block and the consuming threat of impending loss. They meet when she returns for healing at Guernsey's natural health centre, La Folie, and Charlotte becomes involved in Andy's family history. Together they embark on a hunt for the truth... ECHOES OF TIME WINNER OF THE DIAMOND BOOK AWARD 2017 The fifth of The Guernsey Novels, Echoes of Time is a dual-time story set in the German Occupation and present-day Guernsey and is likely to appeal to fans of The Guernsey Literary and Potato Peel Pie Society. Betrayal, injustice and revenge echo down the years... 1940. Olive marries farmer Bill Falla. The Germans occupy Guernsey. All too soon Olive realises she has made a mistake. Her life changes when she meets Wolfgang, a German officer-however there's a price to pay. . . 2010. Natalie Ogier returns to Guernsey to escape an abusive relationship - only to be plagued by odd happenings in her beautiful cottage on the site of a derelict and secluded farm. Disturbing dreams, disembodied voices and uncanny visions from the past. She becomes increasingly ill at ease as someone else's past catches up with her own... Her only immediate neighbour, Stuart, is the grandson of the original owners, Bill and Olive. Thrown together in a bid to find out what happened to Olive, can they each survive the repercussions of the past and move on? THE BETRAYAL "An absolutely riveting read" Book Six of The Guernsey Novels is another dual-time story set during the German Occupation and present-day Guernsey and is likely to appeal particularly to fans of the book The Guernsey Literary and Potato Peel Pie Society. Treachery and theft lead to death - and love 1940. Teresa Bichard and her baby are sent by her beloved husband, Leo, to England as the Germans draw closer to Guernsey. Days later they invade... 1942. Leo, of Jewish descent, is betrayed to the Germans and is sent to a concentration camp, never to return. 1945. Teresa returns to find Leo did not survive and the family's valuable art collection, including a Renoir, is missing. Heartbroken, she returns to England. 2011. Nigel and his twin Fiona, buy a long-established antique shop in Guernsey and during a refit, find a hidden stash of paintings, including what appears to be a Renoir. Days later, Fiona finds Nigel dead, an apparent suicide. Refusing to accept the verdict, a distraught Fiona employs a detective to help her discover the truth... Searching for the rightful owner of the painting brings Fiona close to someone who opens a chink in her broken heart. Can she answer some crucial questions before laying her brother's ghost to rest? Who betrayed Leo? Who knew about the stolen Renoir? And are they prepared to kill - again? REVIEWS "I have now enjoyed all of Anne Allen's novels .. a big fan. . . very 'lively' writer . . a wonderful set of characters in a soft, almost velvety setting. Her books also offer a strong historical element, most often World War Two when the Germans invaded the island".
DOWNLOAD
READ ONLINE

— Amelia is an antagonist. Instead of receiving many welcoming letters before leaving for Guernsey, Juliet merely sets off after a couple from Dawsey, and no one was expecting her.

What other items do customers buy after viewing this item? Page 1 of 1 Start over Page 1 of 1 . This shopping feature will continue to load items when the Enter key is pressed.