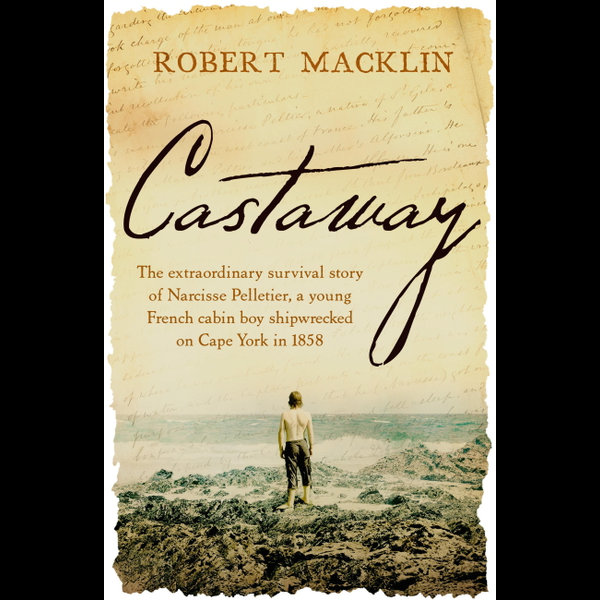 In 1858, 14-year-old Narcisse Pelletier sailed from Marseilles in the French trader Saint-Paul. With a cargo of Bordeaux wine, they stopped in Bombay, then Hong Kong, and from there they set sail with more than 300 Chinese prospectors bound for the goldfields of Ballarat and Bendigo. Around the eastern tip of New Guinea, however, the ship became engulfed in fog, struck reefs and ran aground. Scrambling aboard a longboat, the survivors undertook a perilous voyage, crossing almost 1000 kilometres of the Coral Sea before reaching the shores of the Daintree region in far north Queensland, where, abandoned by his shipmates and left for dead, Narcisse was rescued by the local Aboriginal people. For seventeen years he lived with them, growing to manhood and participating fully in their world - until in 1875 he was discovered by the crew of a pearling lugger and wrenched from his Aboriginal family. Taken back to his 'real' life in France, he became a lighthouse keeper, married and had another family, all the while dreaming of what he had left behind... Drawing from firsthand interviews with Narcisse after his return to France and other contemporary accounts of exploration and survival, and documenting the spread of European settlement in Queensland and the brutal frontier wars that followed, Robert Macklin weaves an unforgettable tale of a young man caught between two cultures in a time of transformation and upheaval.
DOWNLOAD
READ ONLINE

At only 20kg, it's incredibly durable and lightweight. A Very Stable dry tender/fishing canoe that is compact and light with a surprisingly big capacity.

Check out our latest Catalogue! Stay up to date with market trends, new products, innovations and ideas. Sign up to our Castaway Newsletter here: Name * First Last.