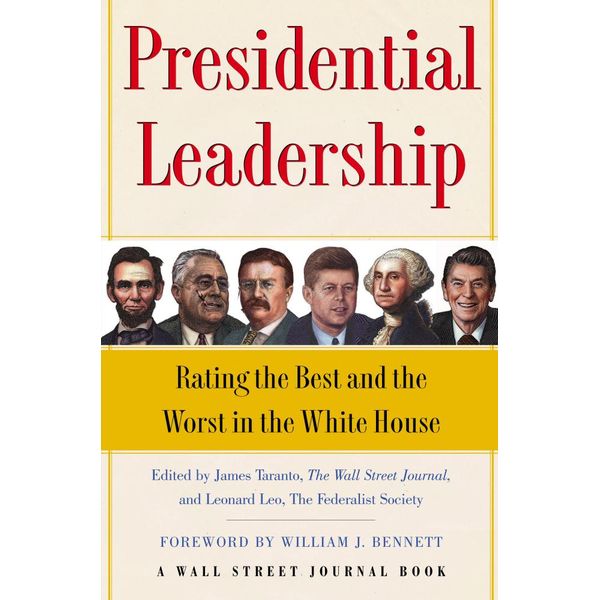 What makes a president great? Two of America's most prominent institutions, The Wall Street Journal and the Federalist Society, with the help of a wide array of eminent scholars, journalists, and political leaders, tackle this question in Presidential Leadership, the definitive ranking of our nation's chief executives.Based on a survey conducted by the Federalist Society and the Journal, Presidential Leadership examines presidential performance in this collection of provocative, enlightening essays written by a distinguished and diverse group of authors.The survey included seventy-eight liberal and conservative scholars, balancing the sample to reflect the political makeup of the U.S. population as a whole. It represents the first national survey in book form that provides a complete ranking of the presidents, along with an appendix that explains the methodology in detail and includes a wide range of valuable data. The result is an important, fresh, and engaging book, rating the presidents from Washington to Clinton and including an early assessment of George W. Bush's presidency by Journal editorial page editor Paul Gigot. Nearly fifty contributors provide their insights, with one essay on each president or on a broader issue of presidential leadership. Among them: Forrest McDonald on Thomas Jefferson Lynne Cheney on James Madison Douglas Brinkley on James Polk Christopher Buckley on James Buchanan Jay Winik on Abraham Lincoln John McCain on Theodore Roosevelt Robert Dallek on Lyndon B. Johnson Peggy Noonan on John F. Kennedy Paul Johnson on Bill ClintonTheir compelling essays, packed with fascinating and often surprising insights, analyze the best and worst of our commanders in chief. Presidential Leadership is the lively result, at once a valuable reference and a tremendously readable collection.
DOWNLOAD
READ ONLINE

The Blockade of Berlin. The Challenge of International Aid.