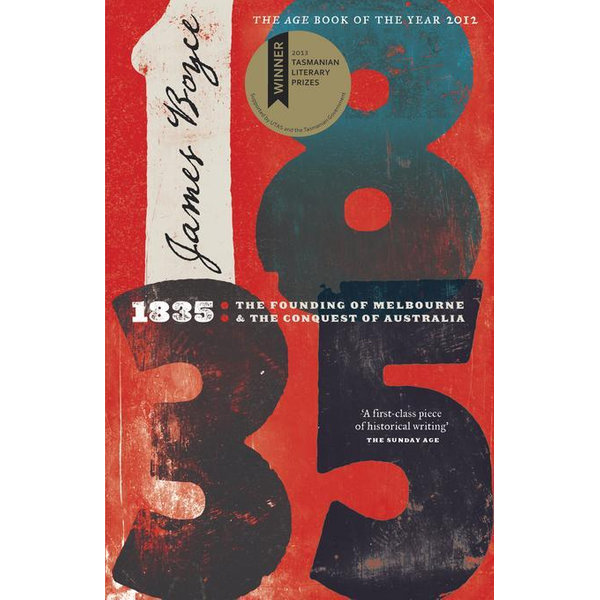 Winner of the 2012 Age Book of the Year Award and the 2013 Tasmania Book PrizeWith the founding of Melbourne in 1835, a flood of settlers began spreading out across the Australian continent. In three years more land - and more people - was conquered than in the preceding fifty.could it have been different?With his first book, Van Diemen's Land, Boyce introduced an utterly fresh approach to the nation's history. 'In re-imagining Australia's past,' Richard Flanagan wrote, 'it invents a new future.' 1835 continues this untold story.'Boyce is a graceful and robust stylist and a fine storyteller and he organises his material beautifully. His book ... deserves a wide audience.' The Sunday Age'1835 is a date to be remembered and this is a book to be pondered.' The Sun-HeraldShortlisted for the Australian History Prize in the 2012 Prime Minister's Literary Awards, the History Prize in the 2012 Queensland Literary Awards, and the Non-Fiction Prize in the 2012 Adelaide Festival Awards for Literature, 2012 Victorian Premier's Literary Awards and 2011 WA Premier's Book Awards.James Boyce's first book, Van Diemen's Land, won the Tasmania Book Prize and the Colin Roderick Award and was shortlisted for the NSW, Victorian and Queensland premiers' literary awards, as well as the Prime Minister's award. Tim Flannery described it as 'a brilliant book and a must-read for anyone interested in how land shapes people.' Boyce wrote the Tasmania chapter for First Australians, the companion book to the acclaimed SBS TV series. He has a PhD from the University of Tasmania, where he is an honorary research associate of the School of Geography and Environmental Studies.
DOWNLOAD
READ ONLINE

We invest individually or jointly with investors, family offices and funds in well researched opportunities through various equity structures, joint ventures and property syndication. 1835 (MDCCCXXXV) was a common year starting on Thursday of the Gregorian calendar and a common year starting on Tuesday of the Julian calendar, the 1835th year of the Common Era (CE) and Anno Domini (AD) designations, the 835th year of the 2nd millennium, the 35th year of the 19th century, and the 6th year of the 1830s decade. Coins bearing the date 1835 were first struck at the Bombay Mint in 1844. Legislation related to this issue: A.D.