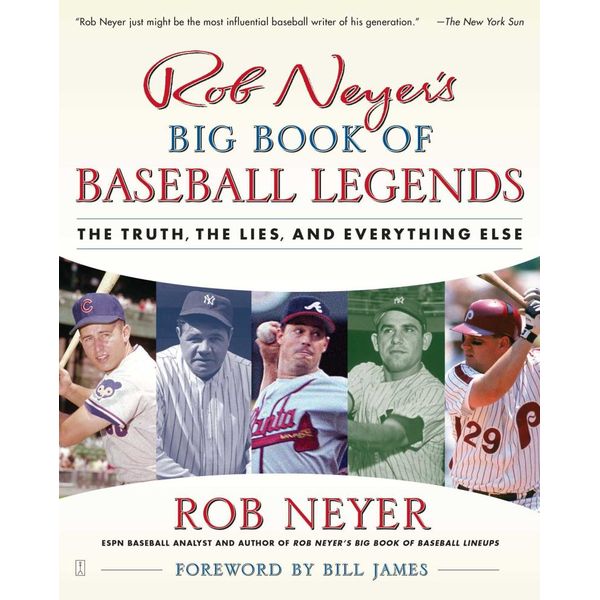 The latest and greatest in ESPN.com baseball guru Rob Neyer's Big Book series, Legends is a highly entertaining guide to baseball fables that have been handed down through generations.The well-told baseball story has long been a staple for baseball fans. In Rob Neyer's Big Book of Baseball Legends, Neyer breathes new life into both classic and obscure stories throughout twentieth-century baseball -- stories that, while engaging on their own, also tell us fascinating things about their main characters and about the sport's incredibly rich history. With his signature style, Rob gets to the heart of every anecdote, working through the particulars with careful research drawn from a variety of primary sources. For each story, he asks: Did this really happen? Did it happen, sort of? Or was the story simply the wild invention of someone's imagination? Among the scores of legends Neyer questions and investigates...Did an errant Bob Feller pitch really destroy the career of a National League All-Star? Did Greg Maddux mean to give up a long blast to Jeff Bagwell? Was Fred Lynn the clutch player he thinks he was? Did Tommy Lasorda have a direct line to God? Did Negro Leaguer Gene Benson really knock Indians second baseman Johnny Berardino out of baseball and into General Hospital? Did Billy Martin really outplay Jackie Robinson every time they met? Oh, and what about Babe Ruth's "Called Shot"?Rob checks each story, separates the truths from the myths, and places their fascinating characters into the larger historical context. Filled with insider lore and Neyer's sharp wit and insights, this is an exciting addition to a superb series and an essential read for true fans of our national pastime.
DOWNLOAD
READ ONLINE

The well-told baseball story has long been a staple for baseball fans. Rob Neyer's Big Book of Baseball Legends Did the Babe really "call" his home run in the 1932 Series? Rob explores whether the legends — and memories of former players, managers and journalists — match the facts in this investigative and humorous collection of tall tales and baseball myths. Rob Neyer's Big Book of Baseball Legends: The Truth, the Lies, and Everyt - GOOD. $4.39.