Reagan, In His Own Hand 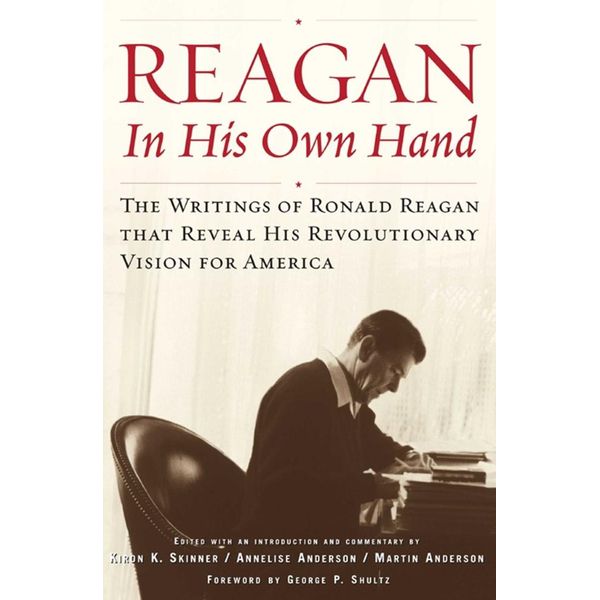 Until Alzheimer's disease wreaked its gradual destruction, Ronald Reagan was an inveterate writer. He wrote not only letters, short fiction, poetry, and sports stories, but speeches, newspaper articles, and radio commentary on public policy issues, both foreign and domestic. Most of Reagan's original writings are pre-presidential. From 1975 to 1979 he gave more than 1,000 daily radio broadcasts, two-thirds of which he wrote himself. They cover every topic imaginable: from labor policy to the nature of communism, from World War II to the second Strategic Arms Limitation Treaty, from the future of Africa and East Asia to that of the United States and the world. They range from highly specific arguments to grand philosophy to personal stories. Even those who knew him best were largely unaware of Reagan's output. George Shultz, as he explains in the Foreword, was surprised when he first saw the manuscripts, but on reflection he really was not surprised at all. Here is definitive proof that Ronald Reagan was far more than a Great Communicator of other people's ideas. He was very much the author of his own ideas, with a single vision that he pursued relentlessly at home and abroad. Reagan, In His Own Hand presents this vision through Reagan's radio writings as well as other writings selected from throughout his life: short stories written in high school and college, a poem from his high school yearbook, newspaper articles, letters, and speeches both before and during the presidency. It offers many surprises, beginning with the fact that Reagan's writings exist in such size and breadth at all. While he was writing batches and batches of radio addresses, Reagan was also traveling the country, collaborating on a newspaper column, giving hundreds of speeches, and planning his 1980 campaign. Yet the wide reading and deep research self-evident here suggest a mind constantly at work. The selections are reproduced with Reagan's own edits, offering a unique window into his thought processes. These writings show that Reagan had carefully considered nearly every issue he would face as president. When he fired the striking air-traffic controllers, many thought that he was simply seizing an unexpected opportunity to strike a blow at organized labor. In fact, as he wrote in the '70s, he was opposed to public-sector unions using strikes. There has been much debate as to whether he deserves credit for the end of the cold war; here, in a 1980 campaign speech draft, he lays out a detailed vision of the grand strategy that he would pursue in order to encourage the Soviet system to collapse of its own weight, completely consistent with the policies of his presidency. Furthermore, in 1984, Reagan drafted comments he would make to Soviet foreign minister Andrei Gromyko at a critical meeting that would eventually lead to history's greatest reductions in armaments. Ronald Reagan's writings will change his reputation even among some of his closest allies and friends. Here, in his own hand, Reagan the thinker is finally fully revealed.
DOWNLOAD
READ ONLINE