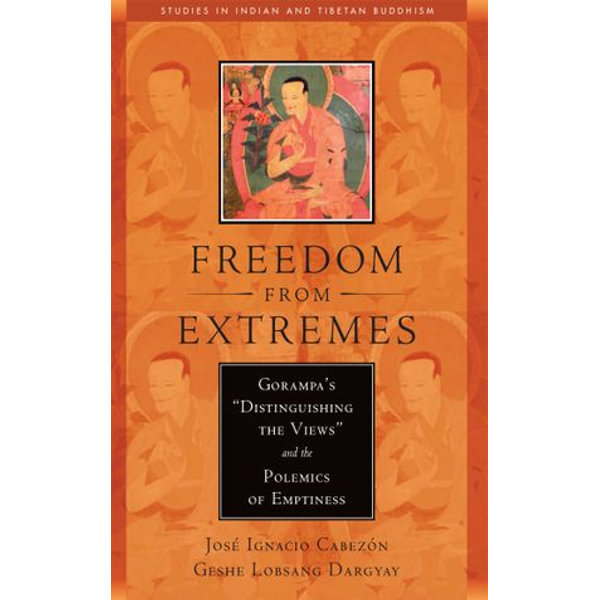 What is emptiness? This question at the heart of Buddhist philosophy has preoccupied the greatest minds of India and Tibet for two millennia, producing hundreds of volumes. Distinguishing the Views, by the fifteenth-century Sakya scholar Gorampa Sonam Senge, is one of the most important of those works, esteemed for its conciseness, lucidity, and profundity. Freedom from Extremes presents Gorampa's elegant philosophical case on the matter of emptiness here in a masterful translation by Geshe Lobsang Dargyay. Gorampa's text is polemical, and his targets are two of Tibet's greatest thinkers: Tsongkhapa, founder of the Gelug school, and Dolpopa, a founding figure of the Jonang school. Distinguishing the Views argues that Dolpopa has fallen into an eternalistic extreme, whereas Tsongkhapa has fallen into nihilism, and that only the mainstream Sakya view - what Gorampa calls "freedom from extremes" - represents the true middle way, the correct view of emptiness. Suppressed for years in Tibet, this seminal work today is widely regarded and is studied in some of Tibet's greatest academic institutions. Gorampa's treatise has been translated and annotated here by two leading scholars of Tibetan Buddhist philosophy, and a critical edition of the Tibetan text on facing pages gives students and scholars direct access to Gorampa's own words. Jose Cabezon's extended introduction provides a thorough overview of Tibetan polemical literature and contextualizes the life and work of Gorampa both historically and intellectually. Freedom from Extremes will be indispensable for serious students of Madhyamaka thought.
DOWNLOAD
READ ONLINE

It strikes me that a major facet of being in relationship with a person with bpd is feeling trapped in the dynamic of swinging back and forth between two extremes. I think this applies not only to being a parent of a child with bpd but also to being a mate (re the latter, especially if minor children are involved).