In the Words of Theodore Roosevelt 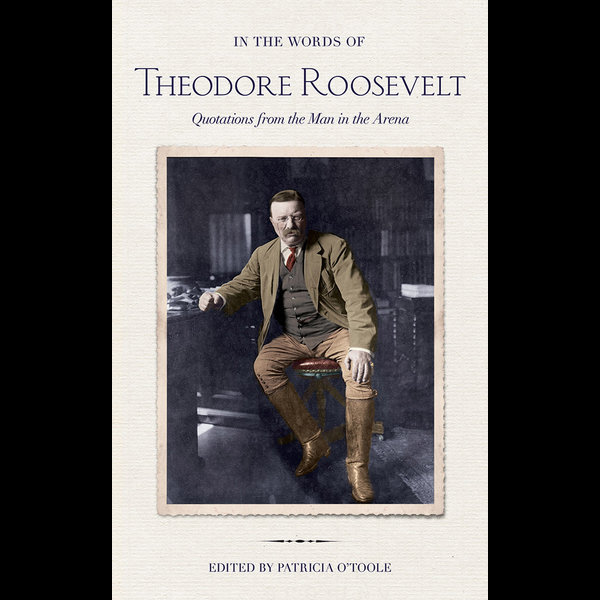 "We cannot do great deeds unless we are willing to do the small things that make up the sum of greatness."—on Action "The American people are good-natured to the point of lax indifference; but once roused, they act with the most straightforward and practical resolution."—on America "Speak softly and carry a big stick—you will go far. If a man continually blusters, if he lacks civility, a big stick will not save him from trouble; and neither will speaking softly avail, if back of the softness there does not lie strength, power."—on the Big Stick "We are, as a whole, still in that low state of civilization where we do not understand that it is also vandalism wantonly to destroy or to permit the destruction of what is beautiful in nature, whether it be a cliff, a forest, or a species of mammal or bird. Here in the United States we turn our rivers and streams into sewers and dumping-grounds, we pollute the air, we destroy forests, and exterminate fishes, birds and mammals—not to speak of vulgarizing charming landscapes with hideous advertisements. But at last it looks as if our people were awakening."—on Natural Resources The public life of Theodore Roosevelt (1858-1919) was marked by his service as the twenty-sixth President of the United States, Vice President, Governor of New York State, Assistant Secretary of the Navy, U.S. Civil Service Commissioner, President of the New York City Police Commission, and New York State Assemblyman. In his life outside of government he was famous as an author, naturalist, rancher, big game hunter, and explorer. The twentieth century would become known as the American Century, and it was Theodore Roosevelt, through his foreign policy, who ushered the United States into the ranks of the world's great powers. In domestic affairs, he used his presidential powers to level the playing field between capital and labor, to protect consumers, and to establish a conservation program that was far-sighted and comprehensive, covering the nation's natural resources, its wilderness areas, its endangered species, its scenic beauty, and the cultural artifacts of its indigenous peoples. Distilled from Roosevelt's voluminous writings and speeches, In the Words of Theodore Roosevelt is a discerning collection of quotations by this American icon who continues to inspire and captivate an extraordinary array of twenty-first-century Americans. Carefully selected and organized by topic by Patricia O'Toole, these quotations reflect the vast range of Roosevelt's interests, the depth of his wisdom, his almost superhuman energy, and his directness. Many of the issues that Roosevelt addressed—from America's international role to the environment—remain pressing concerns today, giving his century-old words remarkable currency. This singular collection of quotations—enhanced by O'Toole's illuminating introductory essay, notes on biographical and historical context, and bibliographies of Roosevelt's writings—is a trove for writers, teachers, students, and all who recognize Theodore Roosevelt's unique role in U.S. history.
DOWNLOAD
READ ONLINE

Scrolling 101Possessed By A Ghost (Yaoi Manga)Python for Data AnalysisAlice's Adventures in Wonderland and Through the Looking GlassKissing the Hag: The Dark Goddess and the Unacceptable Nature of WomenThe FixWisdom of the SadhuThe Human FactorThe Witch's CurseForbidden Falls