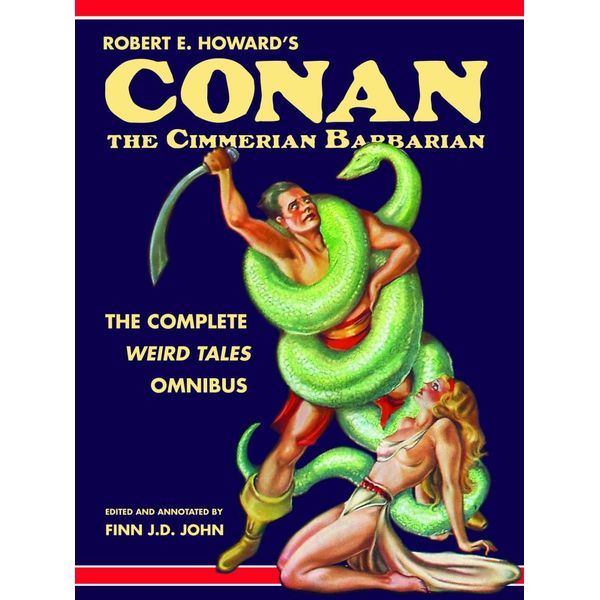 This 860-page collection contains all of Robert E. Howard's Conan the Cimmerian stories published during his lifetime, contextualized with biographical details of their author. The hardcover, a Multimedia Bundle Edition, includes the e-book and audiobook editions as downloadable bonus content.Excerpt from Introduction:"When the first Conan of Cimmeria story appeared in the pages of Weird Tales magazine in December 1932, nothing quite like it had ever before appeared in print.Author Robert E. Howard had been writing stories broadly similar to it for half a decade; but it was with Conan, and the Hyborian Age storyworld in which he was placed, that Howard finally fully doped out the sub-genre that would become known as “sword and sorcery,” of which Howard is today considered the founding father."Conan’s origins date back to an experiment in 1926 titled “The Shadow Kingdom,” featuring the character Kull, exile of Atlantis. The idea — Howard’s great innovation — was, at its core, historical fiction set in a pre-historical period. That pre-historical period — being, of course, lost in the mists of time — could contain anything Howard might like to include: evil races of sentient snake-things, sorcerers, undead creatures, demons walking upon the earth, anything."In other words, Howard was creating a secular mythology."And as with any mythology, secular or no, there would be a hero, a Ulysses or a Theseus, an exceptional man of legend striding through that myth-world, sword in hand, righting wrongs and slaying supernatural monsters and, along the way, providing metaphorical insight onto his world and ours."At the same time, he was finding success with another historical-fiction-fusion innovation: The grim, savage English Puritan Solomon Kane. Kane’s world was the skull-strewn chaos of Europe and north Africa during the Thirty Years War, in the early 1600s. Little enough is known about specific events during that dark time that it was possible to take historical liberties with it as a storyworld, so that it could accommodate dark magic, walking skeletons, vampires, magic staffs, and, of course, N’Longa the witch-doctor."Howard quickly realized he was onto something with Solomon Kane. The first Solomon Kane story, “Red Shadows,” appeared in August 1928 in Weird Tales, and readers loved it. Here was a dark, brooding world of menace and witchcraft connected pseudo-genealogically to their own. It was easy for readers to “take the ride” — to suspend their disbelief and envision Kane’s adventures as a part of the real world."But, perhaps the connection with the real world was too close. The countries of 1630s Europe are well known; the causes of the conflict fully understood. There was only so much Howard could do in Solomon Kane’s world. Moreover, Solomon Kane is just a hard character to root for. Unlike Kull, he is, not to put too fine a point on it, really not a sane man."So it makes perfect sense that after the shadowy, prehistoric world of Kull and the dark, necromantic world of Solomon Kane, Howard would combine these two precursors to develop a world that was far enough into the distant past to be free of actual historical constraints — like Kull’s — yet close enough to the present to still exist as echoes and legends in the world’s mythologies."And so Howard created The Hyborian Age, circa 10,000 B.C. And to play the role of our avatar as we explore this shadowy, almost-historicalworld, he gave us Conan the Cimmerian - to tread the jeweled thrones of the Earth under his sandalled feet."
DOWNLOAD
READ ONLINE

Howard's 'Conan the Barbarian' stories in the order in which they were set, plus the poem 'Cimmeria' and the pseudo-historical 'The Hyborian Age'. I would like to thank Project Gutenberg - go to their website if you're interested in reading more excellent works for free - and also Dale Rippke, whose version of the chronology ... Robert E.