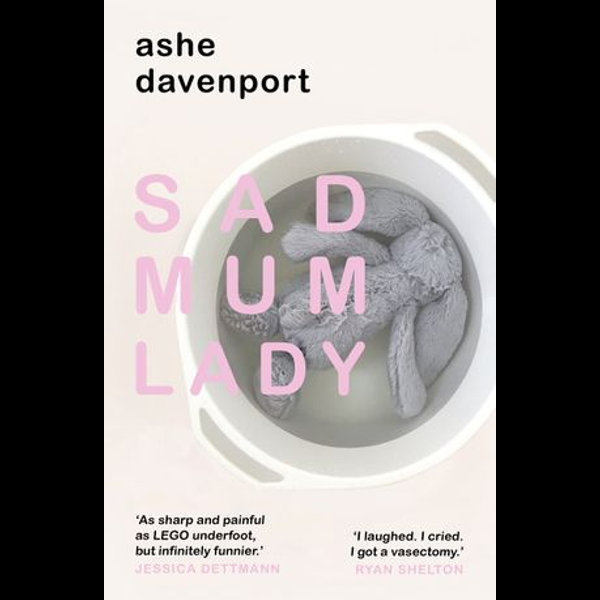 Sad Mum Lady is a collection of essays by a woman who loves her kids and hates motherhood. Pregnancy dragged Ashe kicking and screaming into parenthood, and when she arrived it hit her in the face with a brick. Repeatedly. The stories take place during her own excruciating birth as a mother. Her claw marks can be traced from hospital corridors to play centres and a lingerie shop by the sea. This book is motherhood "real-talk" meets bitey anecdotes with a touch of the surreal. It's for the mum wrestling her screaming toddler out of the cafe, her cheek red from having just been slapped with a tiny sticky hand. It's for the partners pushing the pram on a Saturday morning, mystified as to why they just received a hissing death threat in response to their suggestion that the baby needed feeding. It's for smart funny mothers and people who like them. During Ashe's first pregnancy she started a blog called Sad Pregnant Lady. According to the internet, sadness and pregnancy meant postnatal depression. The internet kept telling her she was something that needed to be fixed. The blog was Ashe's attempt to reclaim sadness as an appropriate human response to pregnancy. Her life as she knew it was about to change forever, her body and mind were no longer her own and the climate crisis was potentially going to engulf her child's future in flames. It connected with a lot of people. Most of them were mothers who were struggling too. After Ashe became a mother, she found that she was still quite sad, and this book is her exploring and sharing that experience. Writing this book helped Ashe a lot and it is her hope that its humour and raw honesty will help others too.
DOWNLOAD
READ ONLINE

Her debut book began as a personal blog called Sad Pregnant Lady, which would become Sad Mum Lady. These days she's a mother of two, and a somewhat happier person. Sad Mum Lady (Audio Download): Ashe Davenport, Ashe Davenport, Wavesound Audiobooks: Amazon.com.au: Audible ‎ 'If people knew how bad this was,' I said to a friend two weeks after the birth, nipples flashing red like emergency lights under my dressing-gown, 'they would be sterilised on their thirteenth birthdays.' It sometimes feels like there's a rule for parents: if you're going to say… Sad Mum Lady by Ashe Davenport was published in 2020 by Allen & Unwin.

She loves her children and hates motherhood, comparing the latter to receiving a brick to the face. She and her three sisters were raised by their single mother in the south-eastern suburbs of Melbourne. Unapologetic and frank, Sad Mum Lady navigates the joys of motherhood in ways that will be familiar, hilarious and essential reading for parents and non-parents alike.