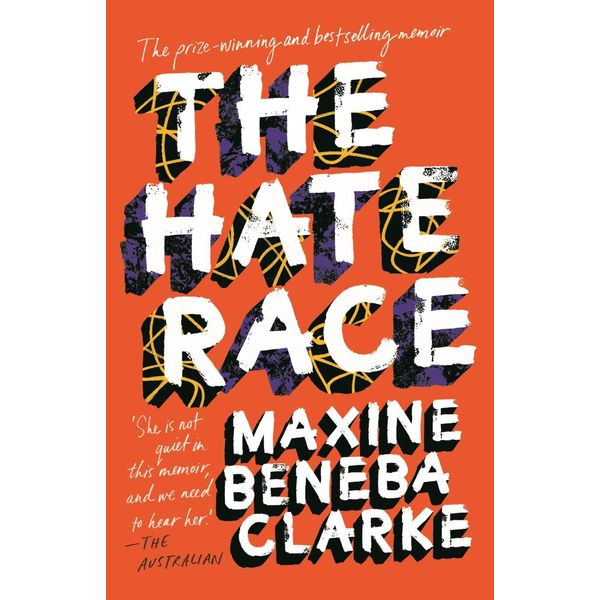 'Maxine Beneba Clarke is a powerful and fearless storyteller'Dave Eggers, international bestselling author of A HEARTBREAKING WORK OF STAGGERING GENIUS.'Technically, this book is near-perfect.' BOOKS + PUBLISHING, FIVE STARS'Clarke's book is utterly compelling. And it might just break your heart.' AFR'She is not quiet in this memoir, and we need to hear her.' Stephen Romei, THE AUSTRALIAN'With force and grace, by stealth and shock, The Hate Race makes its point, gets under the reader's skin.' THE SATURDAY PAPER'Against anything I had ever been told was possible, I was turning white. On the surface of my skin, a miracle was quietly brewing . . .'Suburban Australia. Sweltering heat. Three bedroom blonde-brick. Family of five. Beat-up Ford Falcon. Vegemite on toast. Maxine Beneba Clarke's life is just like all the other Aussie kids on her street.Except for this one, glaring, inescapably obvious thing.From one of Australia's most exciting writers, and the author of the multi-award-winning Foreign Soil, comes The Hate Race: a powerful, funny, and at times devastating memoir about growing up black in white middle-class Australia.'There is a tendency to talk about a young author such as Clarke as a "writer to watch" with the expectation that she may, one day, achieve the extraordinary. With THE HATE RACE, she already has; don't watch, watch out.' THE AUSTRALIAN'This book deserves a wide readership' THE BIG ISSUEAbout the AuthorMaxine Beneba Clarke is a widely published Australian writer of Afro-Caribbean descent and the author of the poetry collections Gil Scott Heron Is on Parole and Nothing Here Needs Fixing. Maxine's short fiction, non-fiction and poetry have been published in numerous publications including Overland, The Age, Meanjin, The Saturday Paper and The Big Issue. Her critically acclaimed short fiction collection Foreign Soil (2014) won the ABIA for Literary Fiction Book of the Year 2015, the 2015 Indie Book Award for Debut Fiction, and Maxine was also named as one of the Sydney Morning Herald's Best Young Novelists for 2015, as well as being shortlisted for the Matt Richell Award for New Writing at the 2015 ABIAs and the 2015 Stella Prize. A collection of Maxine's poetry Carrying The World, her memoir The Hate Race and her first children's picture bookThe Patchwork Bike will be published in 2016.
DOWNLOAD
READ ONLINE

Customer Reviews ... The Hate Race Review : Maxine Beneba Clarke's Urgent Writing Is Unique and Vital Fiona Wright, 2016 single work review — Appears in: Brisbane Times, 22 July 2016; — Review of The Hate Race : A Memoir Maxine Beneba Clarke, 2016 single work autobiography Abstract 'A few years ago, my writers' workshop, based in Bankstown, left a meeting to celebrate at the nearby sports club - a place that ... The Hate Race explores the sun-drenched, suburban, middle-class childhood of Clarke and her siblings, born in Australia to parents of Jamaican and Guyanese descent who emigrated from England in the 1970s. Sweltering heat. Three bedroom blonde-brick.

Maxine Beneba Clarke's life is just like all the other Aussie kids on her street. Except for this one, glaring, inescapably obvious thing A collection of Maxine's poetry Carrying The World, her memoir The Hate Race and her first children's picture book The Patchwork Bike were all published in 2016.