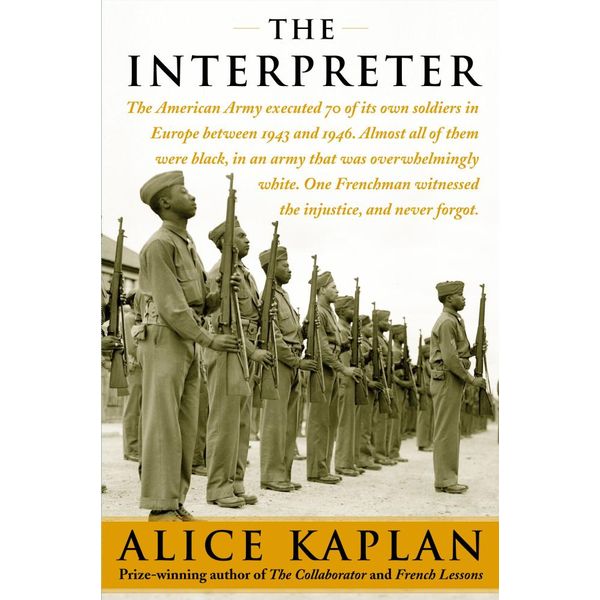 No story of World War II is more triumphant than the liberation of France, made famous in countless photos of Parisians waving American flags and kissing GIs, as columns of troops paraded down the Champs Elysees. Yet liberation is a messy, complex affair, in which cultural understanding can be as elusive as the search for justice by both the liberators and the liberated. Occupying powers import their own injustices, and often even magnify them, away from the prying eyes of home. One of the least-known stories of the American liberation of France, from 1944 to 1946, is also one of the ugliest and least understood chapters in the history of Jim Crow. The first man to grapple with this failure of justice was an eyewitness: the interpreter Louis Guilloux. Now, in The Interpreter, prize-winning author Alice Kaplan combines extraordinary research and brilliant writing to recover the story both as Guilloux first saw it, and as it still haunts us today. When the Americans helped to free Brittany in the summer of 1944, they were determined to treat the French differently than had the Nazi occupiers of the previous four years. Crimes committed against the locals were not to be tolerated. General Patton issued an order that any accused criminals would be tried by court-martial and that severe sentences, including the death penalty, would be imposed for the crime of rape. Mostly represented among service troops, African Americans made up a small fraction of the Army. Yet they were tried for the majority of capital cases, and they were found guilty with devastating frequency: 55 of 70 men executed by the Army in Europe were African American -- or 79 percent, in an Army that was only 8.5 percent black. Alice Kaplan's towering achievement in The Interpreter is to recall this outrage through a single, very human story. Louis Guilloux was one of France's most prominent novelists even before he was asked to act as an interpreter at a few courts-martial. Through his eyes, Kaplan narrates two mirror-image trials and introduces us to the men and women in the courtrooms. James Hendricks fired a shot through a door, after many drinks, and killed a man. George Whittington shot and killed a man in an open courtyard, after an argument and many drinks. Hendricks was black. Whittington was white. Both were court-martialed by the Army VIII Corps and tried in the same room, with some of the same officers participating. Yet the outcomes could not have been more different. Guilloux instinctively liked the Americans with whom he worked, but he could not get over seeing African Americans condemned to hang, Hendricks among them, while whites went free. He wrote about what he had observed in his diary, and years later in a novel. Other witnesses have survived to talk to Kaplan in person. In Kaplan's hands, the two crimes and trials are searing events. The lawyers, judges, and accused are all sympathetic, their actions understandable. Yet despite their best intentions, heartbreak and injustice result. In an epilogue, Kaplan introduces us to the family of James Hendricks, who were never informed of his fate, and who still hope that his remains will be transferred back home. James Hendricks rests, with 95 other men, in a U.S. military cemetery in France, filled with anonymous graves.
DOWNLOAD
READ ONLINE

We handle interpreting and translating assignments across most industries, including insurance, mining, legal and government. The Interpreter is a news aggregator aimed at civic education and empowerment within the Vietnamese community. the interpreter's name, if a specific interpreter is required for continuity of care reasons. When booking a telephone or video remote interpreter, inform the language service provider about the telephone or video system that will be used, for example, whether a speaker telephone, a VRI system or a dual handset telephone will be used. An interpreter is a qualified professional who enables communication between people who speak or sign a different language.

Vaccine hesitancy and the risks in rural Papua New Guinea . An endless game of whack-a-mole? Nigeria's Ngozi Okonjo-Iweala, the WTO, and what's next? The politics of being Chinese in Australia .