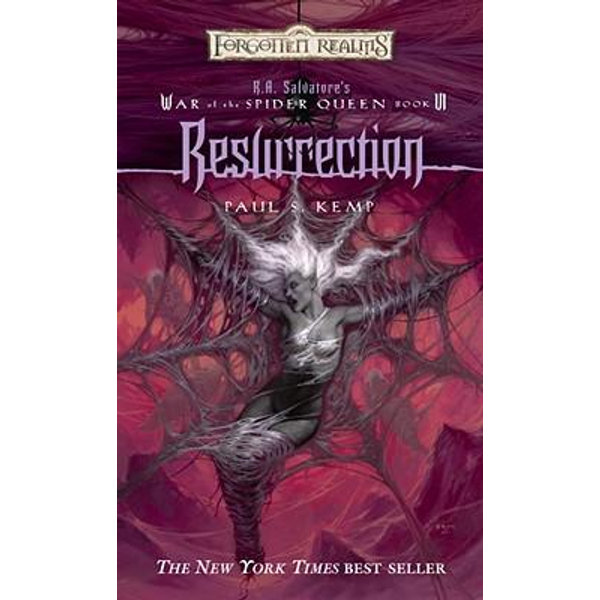 “Finding someone to finish a series after five novels from five different authorsis no easy task. He’s got to be willing to find all the open roads the others haveleft for him. He’s got to do his homework, and quickly. And given the quality ofhis predecessors’ work, he’s got to be good . . . Enter Paul Kemp. Whew! Writerslike this don’t come along every day.”–R.A. Salvatore The New York Times best-sellingauthor of The Two SwordsTHE SPIDER QUEEN LIVES AGAINBut something is different,something her priestesses can hear in the winds, feel in their spirits, and for aselect few see with their own eyes. The Demonweb Pits, removed from the Abyss totake its place among the lower planes, is more dangerous, more horrifying than anyonehas ever imagined. Teeming with feral spiders bent on ripping each other to pieces–killing, eating, and killing again–the blasted landscape of Lolth’s personal hellis still forming.Quenthel Baenre, with the tattered remnants of her expeditioncontinuing to plot against her, crosses that spider-infested killing ground in hopesof answering the call of her reborn goddess. If she can make it to Lolth’s side,can she even imagine what plans the Queen of the Demonweb Pits has had for her allalong?The final novel in an epic six-part series from the fertile imaginationsof R.A. Salvatore, and a select group of the newest, most exciting authors in thegenre. Join them as they bring an end to a devastating war, and give birth to thegreatest horror the Realms has ever known.Danifae Yauntyrr, former battle-captiveof House Melarn, has come too far to stop now. She has regained her freedom afteryears of servitude, but has yet to exact her revenge. Though she has gained much,grown in both power and ambition, and enjoys the protection of the powerful draeglothJeggred Baenre, Danifae still needs to kill Halisstra Melarn. But how can she whenshe’s followed Quenthel and Pharaun into the heart of Lolth’s reformed domain, ahellish world of demonic spiders bent on eating each other, and anything else stupidenough to get in their way–including the chosen vessel of Lolth herself.While Danifaewonders how she’ll ever take vengeance on a woman she left behind on the surfaceof Faerûn, the very target of her burning hatred is close on her heals. Halisstrahas come to the Demonweb Pits with a very different agenda. In her hands she holdsthe fabled Crescent Blade, a sword she believes will grant her the power to killLolth herself–but only if they find her before she fully completes her own mysteriousRESURRECTIONThe War of the Spider Queen comes to an end.From the Paperback edition.
DOWNLOAD
READ ONLINE

If God exists, and if He created the universe and has power over it, then He has power to raise the dead. "Resurrection" is the nineteenth episode of the seventh season of Stargate SG-1. 1 Synopsis 2 Plot 3 Appearances 4 Notable Quotes 5 Notes 6 In other languages 7 External links SG-1 minus Colonel Jack O'Neill are in Los Angeles where the NID Agent Malcolm Barrett discovers a Rogue NID experiment.

Episode 2 43m. Kara Toygar ... Resurrection, the rising from the dead of a divine or human being who still retains his own personhood, or individuality, though the body may or may not be changed. But if there is no resurrection of the dead, not even Christ has been raised; and if Christ has not been raised, then our preaching is vain, your faith also is vain.read more.